Posted by u/Basilpop 230 days ago

The Dash Ecosystem - A (non-exhaustive) overview 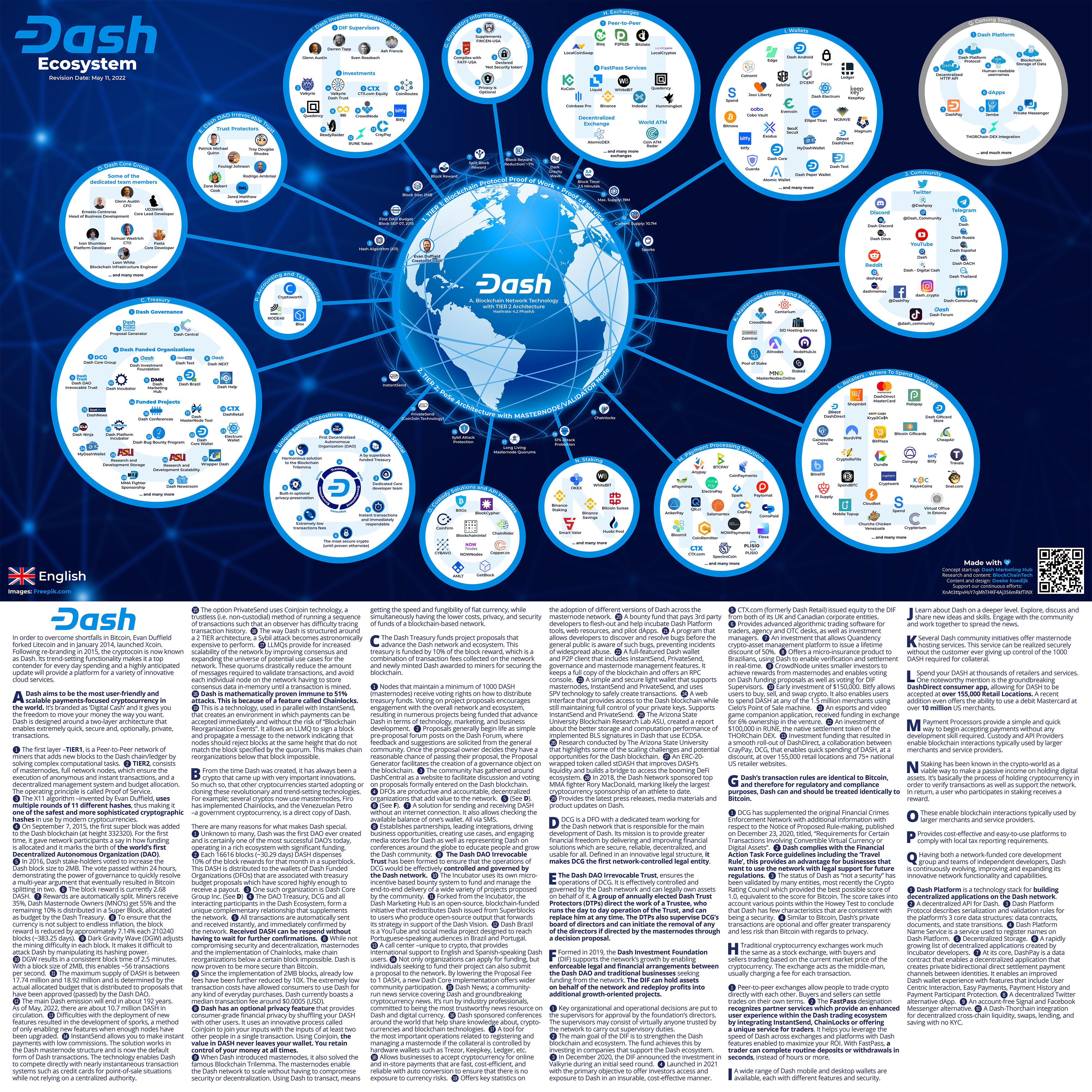 Why you should be excited about the Dash Platform

Djed is a new stable-coin built on the Cardano blockchain; currently 4X over-collateralized using ADA, Cardano's native token. Future plans are to (maybe) add wrapped BTC and wrapped ETH as collateral. IMO, we should talk to them, and get them to add wrapped Dash as another form of collateral.

**Dear fellow members of the Dash community,** I am a long-term Dasher, and Dash is currently the only coin that I buy. I set a DCA budget, and I buy a fixed dollar amount of Dash each and every month. However, the only other coin that has caught my attention is Cardano (ADA). My long-term DCA plans are to eventually migrate to a monthly DCA plan where I spend 60% of my monthly budget buying Dash, and the remaining 40% buying ADA. **Djed** is a new stable-coin built on the Cardano blockchain that is pegged to one U.S. dollar: [https://coinmarketcap.com/currencies/djed/](https://coinmarketcap.com/currencies/djed/) In this recent video, a member of the Cardano community/an employee of a company named "COTI" explains that Djed is 4X over-collateralized using ADA, but future plans are to possibly add wrapped BTC and wrapped ETH as collateral (the guest discusses this during the last minute of the video): [https://www.youtube.com/watch?v=eFcd4YzrsuU](https://www.youtube.com/watch?v=eFcd4YzrsuU) I think that Djed presents a unique opportunity for the Dash community (perhaps the Dash Trust Protectors) to reach out to the Cardano community, and get wrapped Dash added to the Djed collateral pool. **Thank you!!!**

Important thread on why Evo matters

Dash is being delisted from Webull

Without any way to transfer it out or any option other than taking a loss on the value. Nice of them, eh?

Crypto of the day: DASH 🏆 The Crypto Diary ✍️ 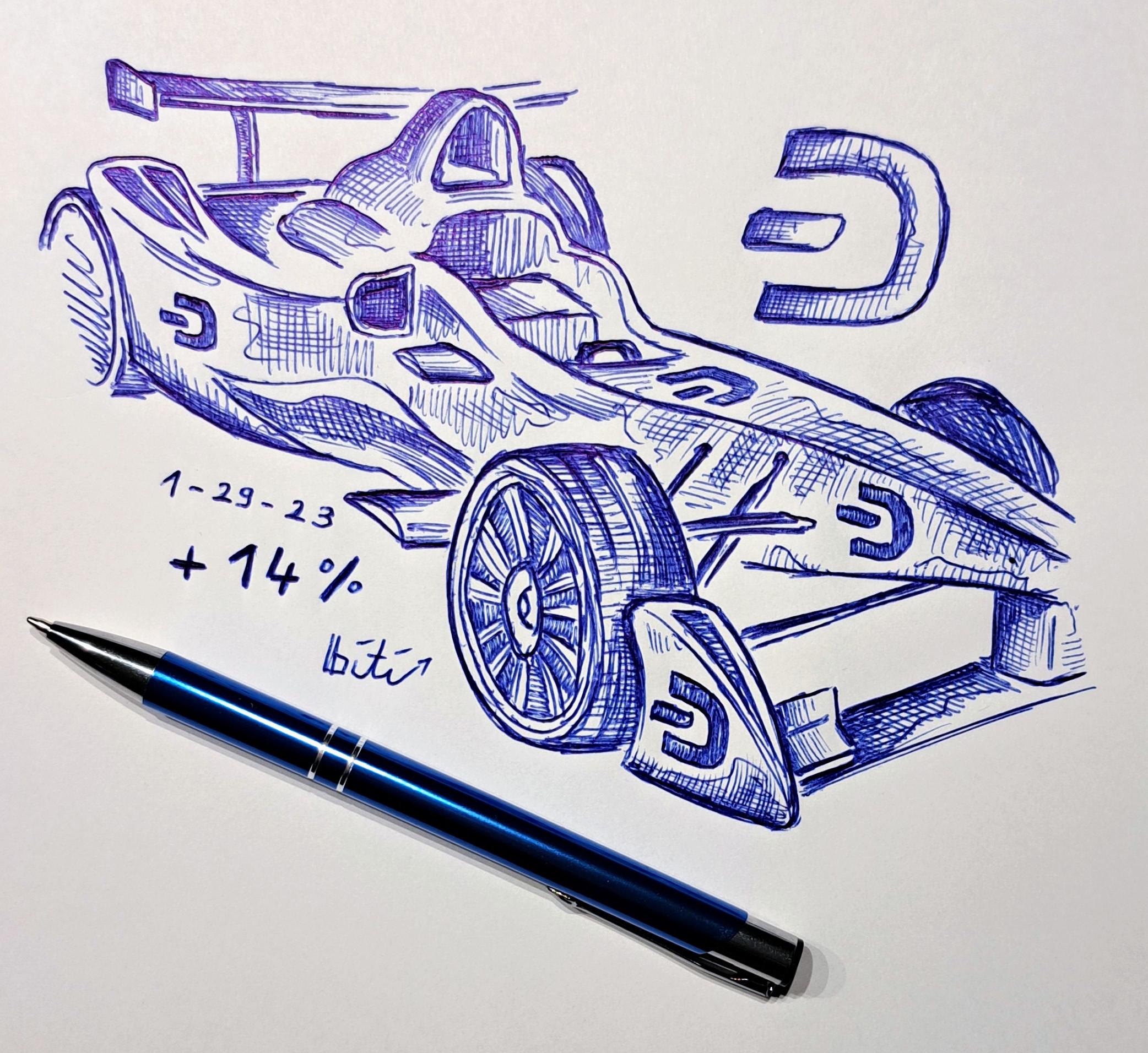 Dash Gained 10.92% today and is leading the Charts! 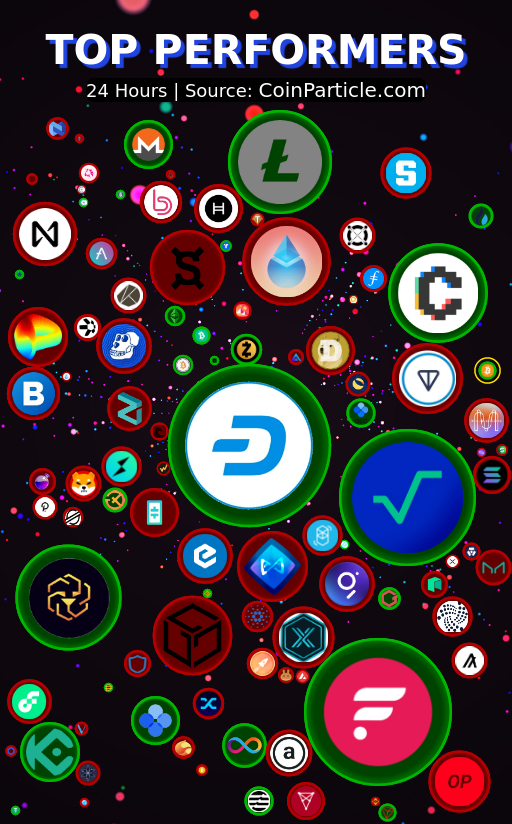 Dash is the top gainer currently 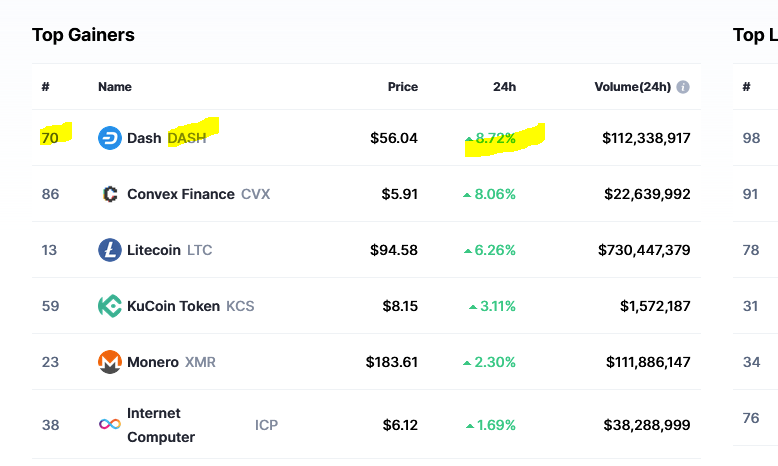 Masternode Staking Over 1K, But Less Than 2K?

Do masternodes have to each have exactly 1000 DASH? Or is it possible to stake say 1400 DASH, and still capture the rewards for the extra 400?

It's time crypto has a home. My $10 billion plan to buy the Island Nation Tuvalu and turn it into a crypto utopia. It could become a hub of crypto tech, trading and decentralization. Dash could base operations here. The profit potential here is huge, who's with me?

The Island Nation Tuvalu is at risk of sinking and there are reports it could be underwater by the end of the century. I was thinking we as the crypto community could come to the rescue and buy them out and at the same time we'd receive an independent nation that is able to set its own rules and doesn't answer to anyone. That way we could become the first nation that fully embraces crypto and crypto would be the very foundation of our nation. This would result in us being able to relieve ourselves of all the limits put upon us by countries that we live in since many of our governments are anti crypto. You might ask why would we buy a sinking island? Well the fact is from now until 100 years when it might be under water, that's more than enough time for us to make huge profits by creating the first crypto country. In that time we could also come up with a way to stop the island from sinking. The profit potential of creating a crypto country is massive and everyone involved has the opportunity to cash in on the biggest moonshot they've ever witnessed. Tuvalu has a population of approximately 10k people and my plan is to offer each person $1million so $10 billion in total. And for that we would take ownership of the country and we would help all of them move off the island. The people that helped raise the funds to buy the nation could move to and become citizens of the new country. And the companies that provided funding could set up operations in the new country and receive a lot of benefits. Tuvalu has a gdp of $63 million so $10 billion is more than 160x bigger than the size of their gdp. The country could have a vote on whether they will accept this offer and I have a strong feeling they will be in favor of it. Once we buy the nation and turn it into a crypto country we can have crypto casinos, country backed crypto currency, entire crypto economy etc. the money we generate from this will be insane. Also the $1m per person and $10 billion is just an estimate, the actual amount we would pay could be lower than that. And I repeat Tuvalu is an independent nation so there's no limit to what we can do with it once we're in control. There are smaller "nations" with smaller populations like the Falkland Islands but these are dependencies that are still somewhat controlled by countries like the UK so they aren't a good option. Tuvalu is the independent nation with the smallest population so that's why I chose it. Another option is Nauru which has a population of 12k and Palau which has a population of 17k. These are all independent nations and they all have some risk of being submerged underwater so they could be willing to work with us and make a deal. Also one good thing about Palau is it's much bigger than the other islands. Palau is 460 km2 which is about 2.6 times bigger than washington D.C. I will put together a proposal and send it to the people of these nations and their respective governments. They will heavily consider it and with the support of the crypto community I'm sure they'll accept the offer. We will need the crypto community to come together and provide the funding to purchase one of the nations but just remember that the profit potential here is huge. If you help buy one of the nations you could be set for life. We will need to show the nations we will actually be able to come up with the funds to buy them. So as proof that there is interest to buy out these nations I was thinking we could do a wallet signing campaign. No one has to send any funds but users & companies of different blockchains in the crypto space could provide a signature from their wallets showing they're interested in buying these nations. If enough people & companies in the crypto space provide enough signatures we could have wallets with crypto in the billions signaling they're interested in buying these nations. I want to work with the leads of every crypto blockchain and project to get this campaign started. If there's a project you're invested in tell them we need to buy a nation and tell them to join the campaign. Together we can get this done. We will also create a community of people that are interested in creating this new crypto country. So let me know if you want to help make this happen.

Are these examples of bad proposals? Would reporting of helped?

Two, or possibly three Trust Protectors will be doing an AMA with Joel this Friday Afternoon. Post your questions! 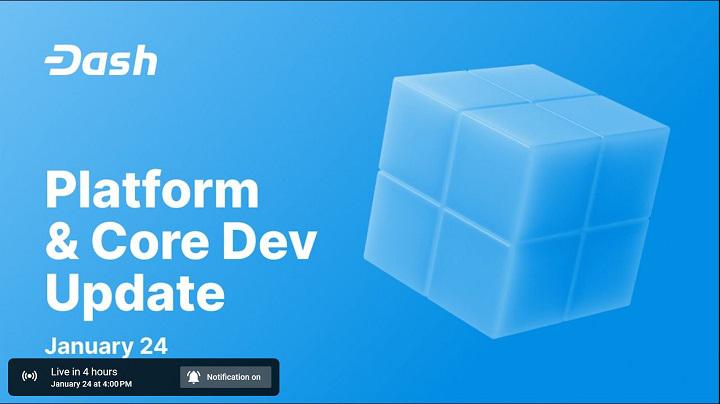 This Friday at 4pm EST/9pm UTC the Dash DAO Irrevocable Trust Protectors come on the Dash Podcast for an update! Submit your questions for them below 👇 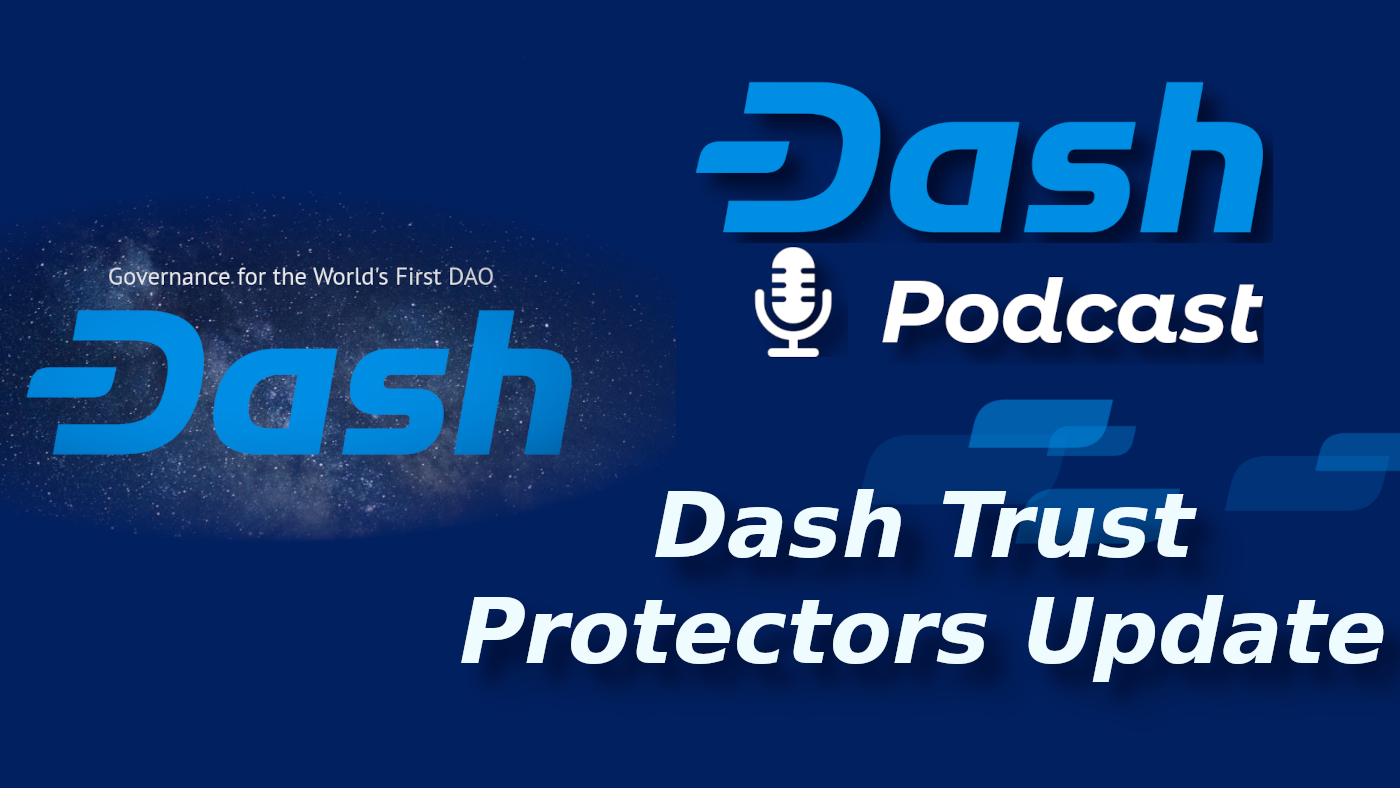 2023 What's Next for Crypto and Blockchain? Share Your Thoughts

How does dash marketing hub keep getting funding?

What would they need to do to stop receiving funding? What have they done to justify continued funding?

There is a lot of fighting between crypto projects but I feel like crypto will completely take over the world and there is enough room for multiple cryptos to thrive. So I had an idea for how communities from different coins can try out other crypto ecosystems and grow stronger together. I was thinking we could do community sanctioned airdrops of our coins on each others blockchain. So for example we could airdrop "ethereum-D" to all holders of ethereum and airdrop it to them on the DASH blockchain. So holders of ethereum could try out DASH with their "ethereum-D". Having anyone that currently has some Ethereum being able to use an aidropped version of that on DASH could result in a lot of people being brought over to the DASH network and the price of DASH would increase. This could be one of the best ways to increase useage of the DASH network if the airdrop is sanctioned by a lot of members of the Ethereum community it could be a big success. And we could do the reverse with Ethereum. Holders of DASH could be airdropped "DASH-e" and this could be used on the Ethereum network. all the pros I listed above would be relevant here as well. Imagine if respected members of DASH said we're airdropping a DASH coin on Ethereum. A lot of people would use that coin. And imagine if respected members of Ethereum said we're airdropping an Ethereum coin on DASH, a lot of people would use that coin as well. This could be a good good way for some cross chain collaboration and it could be a huge event in the crypto space, so what do all of you think? If anyone wants to be involved in this let me know.

One of Dash's largest impediments to crypto market adoption is stumbling. Righteous!