This cycle we are continuing with the more decentralized leadership which replaced the initial single Proposal Owner role with the Director roles. Hub Directors at this time are myself (TheDesertLynx), Kanuuker, and Pozo, with one (myself) acting as a Treasurer (no change since last cycle). Full details on governance particulars can be found in our Rules document, with no changes since last cycle and changes since the previous cycle remaining highlighted in yellow.

Current Admins (in addition to the Directors who also act as Admins) remain unchanged and are GreekNick, Rion, whysmh4dash, and V_o_ncan.

This past cycle we listened to feedback from the network and significantly reduced our base ask and moved larger future projects to their own separate proposals. However, our current larger projects, the Cointelegraph DAO partnership and the Brave browser advertisement campaign, will be funded from our current reserves. Future major campaigns will see their own proposals.

This cycle we secured a partnership with Cointelegraph on their recently-released research report DAO: The Evolution of Organization. This includes supporting coverage from the publication, social media posts, a Twitter space, as well as an advertisement for the Dash wallet in the report itself. We are producing additional content in support of this in the form of a video for the official Dash channel, as well as our own Twitter space, and of course tracking metrics for all of these.

We also debuted our merchant bounty, which provides the incentive for both onboarding new merchants to Dash, and adding existing merchants to available merchant listings, in particular the listing inside the official Dash mobile wallet. We feel that Dash’s killer app, digital cash, is finally ready to be exemplified by the all-in-one wallet which allows users to buy, stake (via CrowdNode), and spend all in one place. Unfortunately, the “spend” part is currently mostly limited to DashDirect merchants, and so we feel that adding as many legitimate, verifiable merchants as possible into the main directory increases the value proposition of using Dash, particularly in countries where DashDirect is not supported. Please feel free to check the wallet for new listings to be added regularly, and please feel free to contribute to the bounty itself if you know of any additional businesses accepting Dash.

This past cycle we have taken on several bounties to support DCG, including translation of the wallets and website to Ukrainian and a bounty to keep Dash.org updated by finding inaccuracies and services supporting/no longer supporting Dash etc. Additionally, we’re taking on a small content bounty for DCG to produce regular content for website, blogs, and so on. We feel that this work is not only important to amplify the effectiveness of DCG-run assets such as the website, but we feel that decentralizing the workload and funding outside of DCG personnel and proposals benefits the network’s decentralization.

Finally, we have continued to run our various social media accounts (Twitter, Instagram, TikTok). We are in the process of restructuring these bounties and have paused several (LinkedIn, Facebook, Social Media Content) while we seek ways of maximizing value to the network.

Please note that approximately 100 Dash of our remaining reserve is earmarked for the completion of the ongoing Cointelegraph DAO report partnership and the Brave browser advertisement campaign. Once similar initiatives are funded from their own separate proposals, updates will be posted on those funding proposals.

Below is a breakdown of our available funds and expenditures: 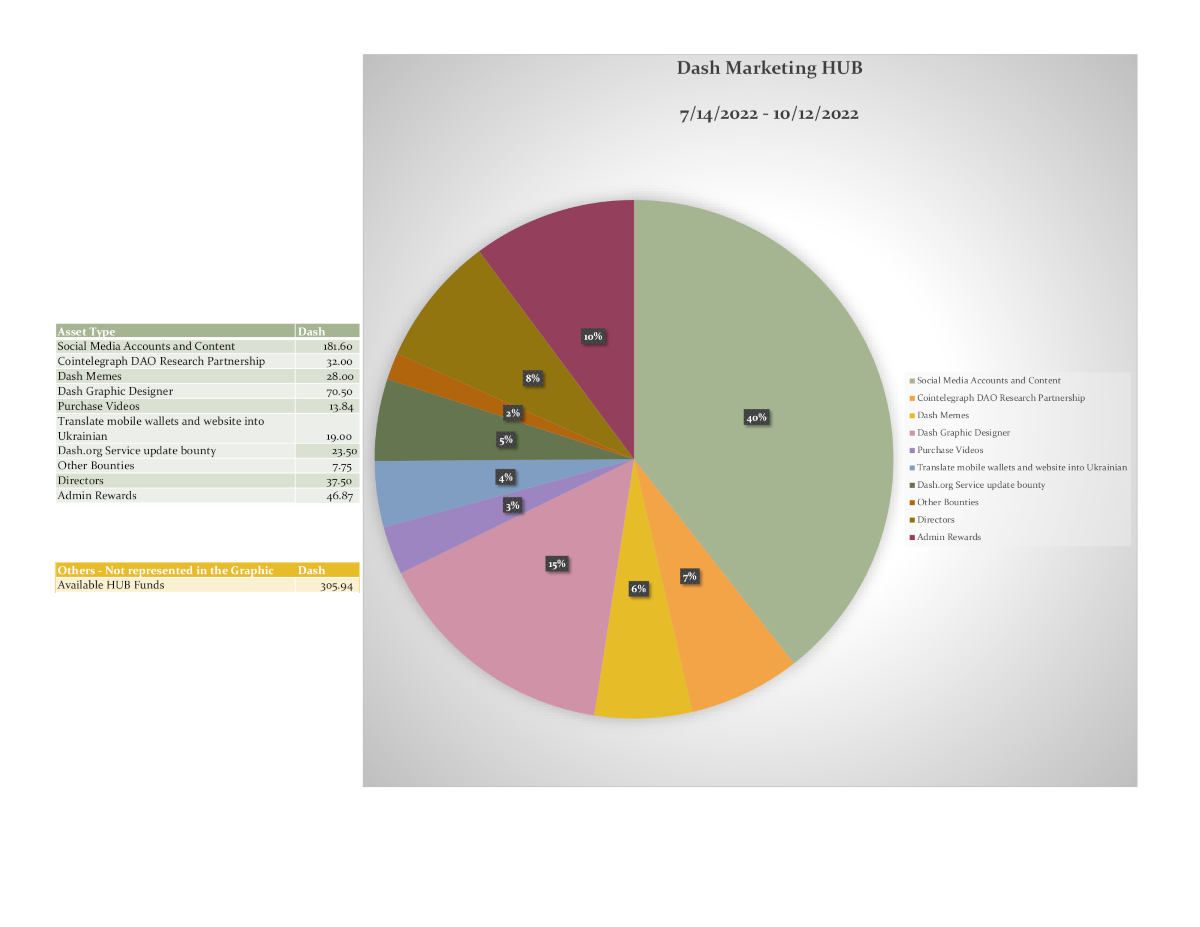 Finally, we Directors have been brainstorming ways of improving the overall quality and accountability of the Hub and its output. We are not entirely satisfied with the performance of certain bounties, and are seeking ways to improve our structure so that the quality of our output is more consistent. This will likely be the final unified proposal where all except the larger projects are grouped together into one proposal. As always, we’ll keep the network updated as to our plans, and solicit feedback from MNOs.

As per our previous proposal, we have shifted away from a single proposal with a central roadmap, and instead run a general support fund proposal (this one) alongside specific proposals for specific initiatives. This will give MNOs a more active role in our roadmap.