PLEASE DOWNVOTE AND VOTE INSTEAD ON OUR REVISED PROPOSAL

This cycle we are continuing with the more decentralized leadership which replaced the initial single Proposal Owner role with the Director roles. Hub Directors at this time are myself (TheDesertLynx), Kanuuker, and Pozo, with one (myself) acting as a Treasurer (no change since last cycle). Full details on governance particulars can be found in our Rulesdocument, with no changes since last cycle and changes since the previous cycle remaining highlighted in yellow.

Current Admins (in addition to the Directors who also act as Admins) remain unchanged and are GreekNick, Rion, whysmh4dash, and VVALTER_DASH.

Here are updates on our progress. In brief, DashDirect’s virtual card launch represented the majority of our focus last cycle. Unfortunately, the program was suspended, and naturally we were unable to execute our promotion strategy as the product we were prepared to focus all our resources on promoting simply ceased to exist. In retrospect, focusing so heavily on promoting a single product presented certain risks, and while a heavy DashDirect focus was unavoidable given the circumstances, we do consider this a hard lesson learned. However, the majority of the funds earmarked for this purpose thankfully remain unspent, in particular those for a Brave Browser campaign (please see this decision proposal to vote on how the funds are used), meaning that we can come out strong this quarter with a variety of promotional initiatives.

We have continued to build and solidify our social media distribution channels and land media appearances, securing appearances on four additional shows this past quarter. We completed an ambitious Dash ecosystem infographic project, which has since been moved to the Incubator to develop it into a living and more permanent resource. Additionally, after being unable to secure assistance for the better part of a year, we were finally able to produce videos of Dash’s Bitfy integration (one of the Dash Investment Foundation’s key investments) live in Brazil, showing Dash’s ability to be spent at millions of merchants in the country.

This quarter we are working closely with the Dash Core Group product and marketing team to coordinate on landing pages and other resources to promote key products more efficiently than we have previously been able to. This represents key cooperation with DCG that we were not able to secure in past quarters, and we’re excited for the benefits this synergy can deliver.

Below is a breakdown of our available budget and expenditures over the past quarter: 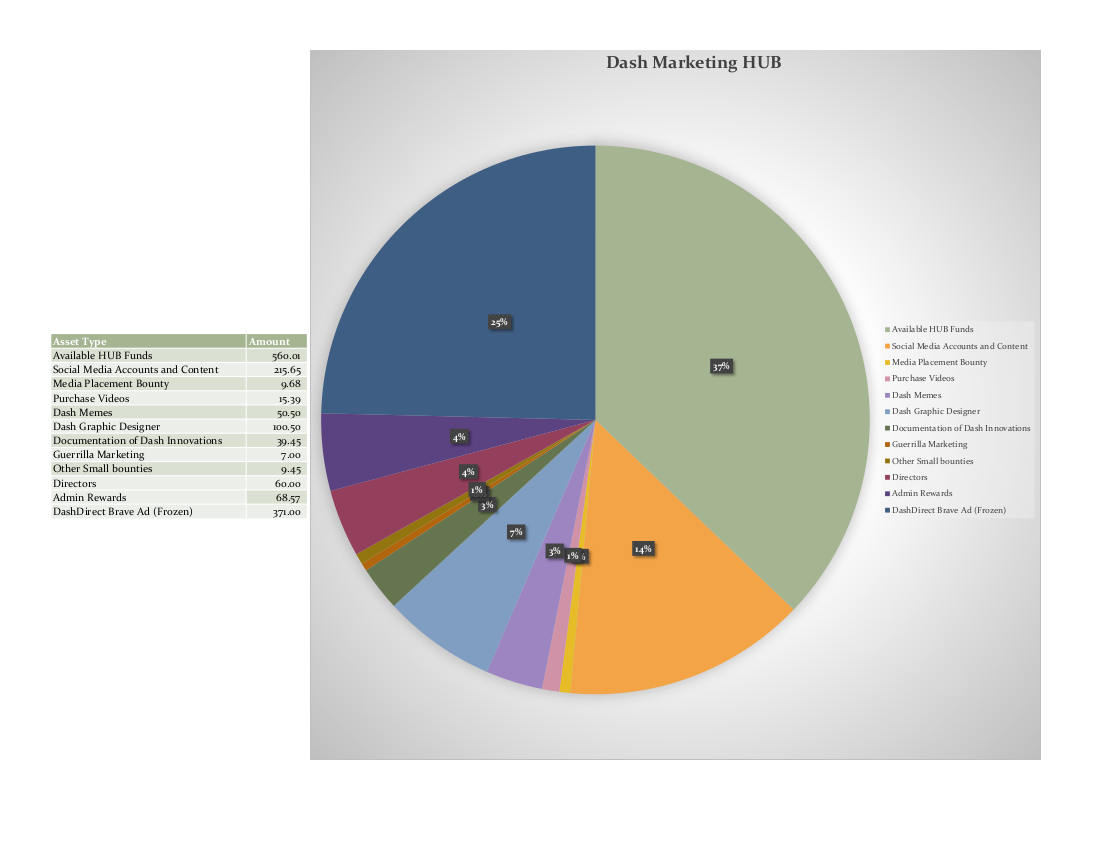 Here we give our current priorities to the areas of funding in Hub, to enable better management and allocation of resources between Bounties. Our priorities have shifted significantly since last cycle due to the suspension of the DashDirect virtual card program, which previously made up the majority of our focus. These will be updated at least in each Quarterly proposal, and are referenced in our Rules.

This quarter the base monthly funding ask remains at 300 DASH. This represents roughly 6% of the total Dash treasury. Due to the decrease of the price of Dash, this amount represents a significant budget reduction since last cycle, however with additional treasury constraints such as new supplemental asks from Dash Core Group, we will make due with less purchasing power.

We previously submitted a separate supplemental funding proposalto aggressively market the DashDirect virtual card launch. These proposal funds, combined with donations we have received from the community, [color=#333333]total[/color][color=#333333]ed[/color] 369 Dash, and were converted to approximately 20,000 USDT to fund a Brave Browser campaign, which reside at this address. Due to the suspension of the virtual card program, we’re seeking guidance from the network in repurposing these funds in this decision proposal.