This cycle we are continuing with the more decentralized leadership which replaced the initial single Proposal Owner role with the Director roles. Hub Directors at this time are myself (TheDesertLynx), Kanuuker, and Pozo, with one (myself) acting as a Treasurer (no change since last cycle). Full details on governance particulars can be found in our Rulesdocument, with no changes since last cycle and changes since the previous cycle remaining highlighted in yellow.

Current Admins (in addition to the Directors who also act as Admins) are GreekNick, Rion, whysmh4dash, and VVALTER_DASH.

Here are updates on our progress. In brief, we have continued to build and solidify our social media distribution channels while remaining in a holding pattern waiting to deploy the majority of our resources on advertising the full DashDirect release, which has been pushed back several times. However, we have finally begun to spend on explicit advertising for DashDirect, as we feel the release is close enough that we can begin both spreading awareness and testing different advertising strategies. We have added a new task type to our new Rules document, Promotion Tasks, to avoid over-compensating Admins for simply approving ad spends. We are currently in talks with Brave to run an advertising campaign on the Brave browser, and will keep the community updated on its progress.

Additionally, due to the price decline over the past quarter, we have paused 9 bounties deemed non-essential in order to save up sufficient resources to support the boosting fund in promoting the DashDirect full release.

In the meantime we have continued to land media appearances, securing appearances on four additional shows this past quarter, including a popular crypto channel which has garnered about 35,000 views at time of writing. We are in the process of lining up interviews for the DashDirect launch and anticipate heavily leveraging this bounty in the coming weeks and months.

We have also implemented referral link tracking to attempt to gain more granularity on DashDirect downloads as a result of our efforts, and will expand our use of these for other Dash-leveraging products and services in order to meaningfully track our ability to not only promote Dash, but to convert new real users of Dash products and services. This will allow us to develop cost-per-acquisition models in order to put a real price tag on acquiring new Dash users, as well as more definitively tell what works and what doesn’t.

Finally, we have added a General Action Bounty, which serves as a community wish list, which has resulted in unprecedented traction in achieving elusive major integrations for Dash. We feel that keeping this bounty open, in addition with working with Dash Core Group and new proposal owners seeking explicit partnership funds (when necessary), can acquire several major integrations in the category of Gemini, BitPay, and so on.

Below is a breakdown of our available budget and expenditures so far: 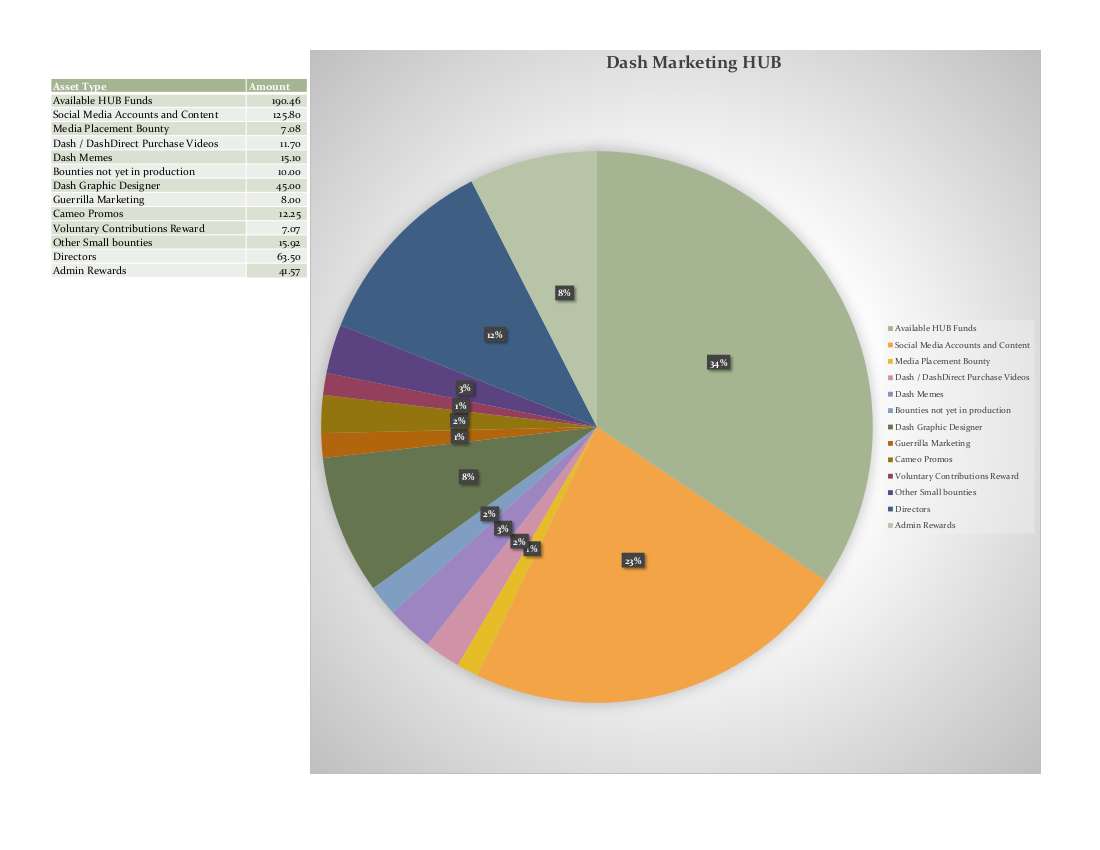 Here we give our current priorities to the areas of funding in Hub, to enable better management and allocation of resources between Bounties. These priorities remain largely unchanged since last quarter as the DashDirect launch is still our main priority, however we have added an integration and partnership priority to our roadmap. These will be updated at least in each Quarterly proposal, and are referenced in our Rules.

This quarter the base monthly funding ask is 300 DASH. This represents roughly 6% of the total Dash treasury. Due to the decrease of the price of Dash, this new amount represents roughly the purchasing power of our original 100 Dash ask, we feel that this amount is sufficient to continue and expand present operations, including maintaining a paid reach presence after the initial earmarked DashDirect funds are expended.

We previously submitted a separate supplemental funding proposal to aggressively market the DashDirect virtual card launch. These proposal funds, combined with donations we have received from the community, total 369 Dash, and can be found at our boosting address which can be found below, as well as in our Rules document:
XwxvHLoTVgSV5v9EKvPYqBZYtdGaBYVnjo

If we are able to secure this new ask, we feel comfortable committing the majority of our current reserves (172 Dash at time of writing) to supplement our boosting budget in running a sufficiently significant advertising campaign for DashDirect without disrupting our regular operations.